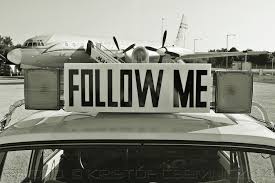 You’re familiar with those cars or trucks with big signs on the back of them that say “Follow Me” or “Pilot Car” on the back that guide you through one-way detours during highway construction.   Pilots of aircraft landing at small to mid-size airports have them as well, usually offered up in order to entice you to taxi your airplane to the best location on the field where you can rest your weary bones and buy fuel from the same people who provide the friendly pilot car.

Landing at an unfamiliar airport can be disorienting, even if you study the airport layout ahead of time.   A two-dimensional diagram, and even a Google Earth snapshot from above, doesn’t resemble the view from the runway once you are rolling along.   Until the advent of readily-available GPS-guided navigation tools, pilots could be easily confused by which taxiway leads to which desired location.   At large airports, taxiing to the ramp could be more complex than the route you took to get there.

If there’s a tower and you know where you want to go, you can always ask for help. Simply say you are “unfamiliar” and ask for “progressive taxi instructions” and the ground controller will guide your every turn.   It takes precious time, so if they’re busy it might be a bit stressful, but usually it’s no problem and they’re more than happy to provide the service.

The “Follow Me” vehicle—often a converted golf cart or ATV, is provided by the local FBO to make sure you don’t accidentally park in someone else’s spot and maybe even buy someone else’s fuel.   It’s a wonderful service, because by the time you have landed you’re tired of making executive decisions and want to relax and following someone who will guide you to the right parking spot takes ta bit of worry out of your arrival.

There is however, a small “gotcha.”   As in all relationships, there is an invisible umbilical cord connecting the pilots of the two vehicles. Such a dependency requires a modicum of trust.   How do I know where I am being taken?   If I had landed at a small airport in crime-ridden Northern Mexico would I wonder where the “follow me” truck was leading me—especially if the sign was written in English?   Even in a mid-size airport in California, would I trust the “follow me” car was leading me to the FBO I intended to go to, or instead the one with the highest fuel and tie-down prices?

Woody Allen once quipped that the reason he spent so many years on his therapist’s couch was because he was breast-fed from falsies.   I confess to you right now that the thirty seconds or so I have spent out of my life focused on that image was a waste of precious time, but there is a point to be made here.   Each of us are born with certain ingredients in place that then get nurtured or otherwise modified by our experiences, and those are the ingredients that determine the extent to which we allow ourselves to trust that the pilot car is not going to lead us to a remote section of the airport where we will be roughed up by ruffians waiting in the bushes or even worse, pay more for fuel than we need to.

But the primary ingredients in building a trusting relationship are simply time and experience.   If we land at the same airport repeatedly and the “follow me” car always takes us to the right place, we are likely to trust them the next time. Trust is not faith though, and too much of it can be dangerous.   When the “follow me” car begins to take you to a dark corner of the airport with a bunch of grungy machine-gun toting folks lollying about it might be better to put on the brakes and get on the radio and make sure you’re tuned to the right frequency.

As a pilot, one never knows who is driving the “follow me” car.   One rarely if ever thinks about it.   One rarely cares.   It is what might be considered a low-risk situation.   The worst that is likely to happen is that you will park your airplane, shut it down, walk to the office and say, “whoops, this is the wrong place.”   That has never happened to me, and likely won’t.   The consequences of following the wrong leader in that situation are not terrible.

Trust, when we have it, is a beautiful thing.   I do experience a sigh of relief when I see the “follow me” sign in front of me.   I am done navigating my way to the airport, and now all I need to do is relax and trust that my credit card is thick enough to contain the cost of the fuel about to be poured into my tanks and oh yes, that my bladder is strong enough to make it to the rest room.   Good thing I wasn’t breast fed from falsies.   I wasn’t breast fed at all, which, I guess, explains everything.