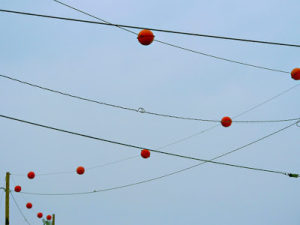 There are a lot of ways to die as a pilot.   My favorite one is at a ripe old age, quietly in the midst of a good night’s sleep.

One way pilots come to their end is to get themselves and their airplanes wrapped up in power lines. Those nasty things can be pretty invisible, thin as they are, and although looking up at them from the ground you can see them against the contrast of the light sky, looking down at them from above they disappear into the background of the terrain.

There are large, bright orange balls that are occasionally attached to power lines in order to make the lines more visible to pilots.   I never knew what they were called until a friend of mine referred to them as “visibility balls.”   The term, you have to admit, has a ring to it, and in the hands of a poet I image it can be dangerous.

From the air, I really appreciate when I see these big balls surrounding wires.   From the ground, they are pretty ugly, but then so are the power lines they are meant to expose.   Ugly on ugly just makes more ugly, but I do appreciate the intention, which is beautiful.   I feel that way about a lot of ugly things with good intentions. Just don’t ask me to name them.

Visibility balls are considerate things, similar in effect to lighthouses for ships and beacons on tall buildings designed for the same purpose.   I am here, they announce, so please don’t bump into me.

In some ways, visibility balls are similar to tattoos, which I think are ultimately designed to say here I am, look at me.   I think even hidden tattoos serve the same purpose, but in that case they are merely being reserved for a specific set of onlookers.   The difference, I think, is that tattoos aren’t really designed to keep anyone safe, unless they are meant to frighten and keep bad guys away, or announce a political affiliation, as I imagine the swastika on Manson’s forehead was intended to do.

I like things designed to keep people safe, but they too can be annoying.   I don’t really care if the public bathroom floor is wet following a good mopping.   If I need a sign to tell me it’s wet then I don’t deserve to use it.   I do like signs telling me to slow down to 35 miles an hour when a curve is approaching, because that clearly indicates that I will need to slow down to 60. I find guardrails on winding mountain roads humorous, as if that would stop a car from tumbling down the side of the mountain. The sign that says “icy” by the side of the road near my house has been proclaiming that fact for 25 years, although I don’t recall a single day in the last 25 years when the road actually became icy.   The sign, by the way, is located a few yards from Thomas Aquinas College, a fact which has given me the inclination to stop alongside the road in the middle of the night and put periods or dashes after each letter, so the sign would read “I-C-Y”, which should be the primary purpose of the nearby college, especially one that emphasizes theology and philosophy.

I am sure I am not the only pilot who likes the idea of giant orange balls strung up high to keep from being caught up in a catastrophe.  The thing I can’t understand is where to find the giant orange men willing to sacrifice them.