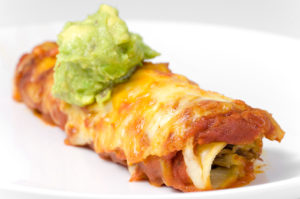 I don’t eat Mexican food too often, but when I do, I usually go for the chile relleno. There’s something wonderful about the balance between the spiciness of the chile and the softening effect of the cheese.   And even though most Mexican restaurants serve generous portions of everything, if the relleno came with only half a chile, I would likely be annoyed.   Like an enchilada, there is something unsettling about half a chile, half a dictionary, half a blog post, half an airplane, or half a flight to anywhere.

One can leave most things half-completed, but flying is something that essentially requires the whole enchilada. You can’t really stop flying mid-air between San Francisco and Houston, although you could always land and call it quits, and spend the night in a roach-infested motel in Gallup, New Mexico.   But in order to be a whole enchilada, or a whole anything, you are going to need more than the sum of its parts.

In order to get off the ground, you need just the right ingredients mixed in just the right proportions. Lift alone won’t get you anywhere, thrust won’t necessarily get you in the air, and drag—needed to keep you from going out of control, is actually designed to get you nowhere, which is why drag is a drag.   You need the whole enchilada, ingredients mixed just right, to achieve the alchemy of controlled flight.

I had a professor in college, whose name for reasons I would prefer not to mention, I don’t recall. (I give in– he slept with my ex-girlfriend, and even though she was an ex, it still bothered me.) He was fond of saying, half-jokingly I hope, that when he died he wanted the definition of “gestalt” written on his tombstone.   It was a silly thing to say, but as a mnemonic device it worked well because I remember the phrase now, more than 40 years later.   A gestalt, Dr. Whatshisname said, was the “ongoing, contingent, sociobiological organization of attention and action.”

We experience life in chunks—in organizations of attention and action, and each chunk is not only ongoing, but it is also contingent on what comes before and after it. The “before” part is obvious, but the “after” part was something illuminated by behaviorists such as B.F. Skinner, who insisted that what we do is often determined by what immediately follows it.

Contingency is important, because it is how things are connected, how we are all interdependent, and why if a tree falls in the forest we may not hear it but it will still scatter the ants beneath it.

As long as you keep cutting the enchilada in half, and realize that you still have an enchilada, then each half becomes a whole unto itself, especially if you keep eating it. You’ve just created smaller enchiladas. That is why in order for something to really be whole, it needs to be something greater than the sum of its parts. If, on the other hand, you were able to break down the enchilada the way I remember breaking down water in chemistry class into hydrogen and oxygen, interesting things begin to happen.

Enchiladas require tortillas, which require flour or masa, and water. To make the cheese you will probably need some milk, rennet, and maybe a starter culture. You might even add some salt to be adventurous.   Then there’s the chile pepper, and maybe a little guacamole.   None of those things on their own look or taste anything like an enchilada. But, mixed together in the right proportions and under the right Mexican sun, something greater than the mere sum of its parts begins to emerge.

Flying, as is true with everything we do, is a gestalt—a contingent organization of attention and action.   To be up high, beyond the realm even of happy little bluebirds, is an alchemical miracle.   As is true for love, good food, and those things that we value most, it is the transformation of disparate elements under the right conditions—a series of intentional acts that taken together exceed the mere sum of its parts.   It is, dare I say, the whole enchilada.

One thought on “The Flight of the Enchilada”